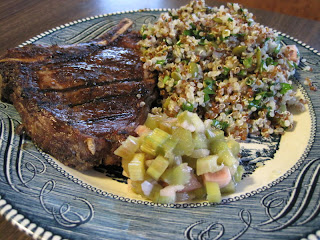 Our neighbor invited me to come along on a rhubarb picking excursion.
In addition to freezing some and turning some into pie I decided to try drying some as candied rhubarb. My experiment got only as far as the candying when I was pulled away into more urgent tasks. By the time I returned my nicely sugared rhubarb had produced a sea of rhubarb juice. All that juice did not look like a good start to dried rhubarb so I put it to other uses instead.
I strained one portion and added it to some quinoa I had cooked up for a summer salad along with fresh chives and toasted pumpkin seeds.
Then I decided to experiment with a rhubarb chutney to serve alongside the grilled steaks I was planning to serve with the quinoa for dinner that evening. I minced some garlic, added fresh ginger and tucked it away in the fridge to let the flavors combine, not knowing if the result would even be edible. It turns out that rhubarb makes a fantastic chutney even when resurrected from another failed preparation.